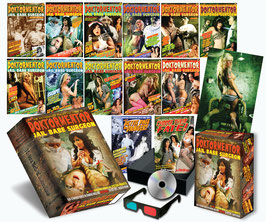 This set contains all 11 issues of Doktormentor (#0-10)  a free poster, two added comics: Choose Their Fate #1 and Bettie Page in Danger #2. 3-D glasses are included along with a Behind The Screams DVD!

"Doktor Mentor by Shh3D Productions is a comic book about a crazed surgeon who operates on the hypersexual women of a lady's prison. The doctor is operating in secret within the bowels of the prison and kidnaps prisoners who catch his fancy. I say comic book but all the panels are photographs with word balloons. It is like a storyboard for the most fucked up softcore b-movie you have never seen.

A lot of love and comedy went into this comic. The girls are hot and they get naked a lot, but it is the writing that is the real star. I would buy this for the story alone.

As an added feature, there is a bonus story in 3-D. Tits, funny writing and 3-D? All it is missing is popcorn and 64 ounces of soda to complete the b-movie experience.

I give it three out of five Pam Griers."

"What happens when you combine a Playboy magazine with a horror film and put it in comic book form? It turns out, the result is a strange, hybrid concept with an incredibly long name. Still not sure yet what to expect? Well that’s probably because it has to be seen to be believed.

Far outside the realm of “normal,” Doktormentor isn’t anything close to the other comic books you may have read. The titular character, a grotesque mad scientist, is looking to conduct fiendish experiments on the sexy but unlucky inmates serving “hard time” in this all-female-prison. Like a strange, late-night cable movie you can’t help but watch, this group of half-naked prisoners attempt to avoid the scientist’s clutches all while scheming for escape and “entertaining” themselves and each other during their down-time.

Doktormentor completing quite a comic haul at the 1:00 minute mark:

To those people I say: The Disturbingly Perverted Diary Of Doktormentor Jail Babe Surgeon is not for you.

For many comic fans, after discovering the joys of superheroes, we started discovering the non-cape books. Whether it was war, western, comedy, or horror we all found something to allow us a break from the superhero comics we loved. I gravitated to horror books, especially ones that didn’t take themselves too seriously. Tales From The Crypt being a standout among those books.

I can happily say Doktormentor continues the tradition of campy horror books that shock, titillate, and deliver laughs.

The book (issue #2) is a photo comic that tells the story of the titular mad scientist and his assistant Nurse Angelina Nawdy (seriously). It turns out his assistant has started having second thoughts about helping Doktormentor with his experiments. His experiments seem to revolve around tying female prisoners up and leering at them half naked. Angelina helps one of his prisoners escape and he punishes her in one of the most inventive ways I’ve ever seen. Angelina becomes Vadgelina…yup. Yes, this is an adult comic. It’s cheesecake photos of sexy ladies in a women in prison setting.

The biggest shock to me wasn’t any of the pictures. It was the words accompanying them. The writing in the book is funny as hell! I’m sure there’s a reason why the writer is not credited, but I wish they were. There are some laugh-out-loud moments in this book and some groan inducing puns. It’s really a funny book where the creators could have gone the easy route and just thrown cookie cutter dialogue to fill in the spaces between boobs. Instead, they’ve got an actual story running through it. The Doktor’s journal entries in particular give a hilarious look into the mad scientist mind.

The backup is a 3D peep show with some funny quips in it, but mainly it’s a peep show.

I picked up this book on a whim at Mid-Ohio and I’m glad I did. I’m going to look into picking up more issues for laughs and boobs (I am ME after all).

I give The Disturbingly Perverted Diary Of Doktormentor Jail Babe Surgeon (I really love that title) 4 grindhousey, sexy, and surprisingly funny cakes!"

"Yeah, very few would pick Doktormentor up from the story. No, one would pick this up for the, umm, visuals. The girls look sexy in the best cheese cake fashion and the creative team made a good effort to tell a humorous story."

"I am actually the cover model strapped to the desk in issue #1! I am so glad you "enjoyed" it. Luckily I had nothing to do with the script writing, I played my part pretty well in Issue #2 and Issue #3 I thought. Issue #3 is my favorite!"

"If you saw DOKTORMENTOR #1 on the newsstands, there is no chance you could walk past it without at least flipping through the pages. It is so over-the-top trashy that it’s surprising Rob Zombie has nothing to do with it. It’s a comic book, but the panels feature live-action photographs. Many of these photographs are, as you can imagine, pornographic.

The writer is so into getting us to buy that this is the actual journal of the man known only as Doktormentor that he (and there is little doubt that it’s a he) doesn’t even put his name on the book. The inside cover details a little background information which actually sounds kind of plausible until they get to the end. The idea is that during the War of 1812, the building was a military prison where sadistic serial killer Willie Keller was held. Naturally, he escaped and was never found. Later, the building was turned into a hospital, then a prison again for the worst offenders. Then, in the ‘Sixties, it was converted to a female only maximum security prison, and before long, inmates started disappearing. Then, Doktormentor’s journal was found, and within its pages we learn about his horrible experiments.

Over the first half of the book, we get to meet #510215, one of the inmates who has been strapped to a chair for Doktormentor’s pleasure . . . er, rather his scientific endeavors. (By the way, did you know that even panties in jail are black and white striped?) Nurse Nawdy prepares her for the horrors to come by, naturally, removing #510215’s clothes. She “tantalizes” the captive with tales of Doktormentor’s previous experiments, all of which went wrong and ended in death. Meanwhile, in the subplot (yes, there’s a subplot!), Nurse Nawdy is working with the local police to get Doktormentor thrown in jail because she has just learned that #510215 is her sister.

Nothing, absolutely nothing, is taken seriously in this book. The dialogue is so purposely godawful it would make even George W. Bush grimace. For example, Nurse Nawdy starts playing with #510215’s nipples and explains why: “By inducing sexual arousal before he pulls the switch, your own heightened sensitivity will keep your genitals intact. Otherwise, the blast of cosmoelectricity will fry your nerves causing breast and vaginal leakage.” Really? When #510215 is trying to escape her bonds and can’t, she says, “Can’t break free from this chair! There must be dental adhesive on these buckles. There’s no slipping or shifting, and no fear of falling out at an embarrassing moment.” And it really doesn’t help that the models are really, really bad at showing fear. #510215 goes through the book with a look of sexual amusement on her face. She might as well be saying, “Oh no! Don’t put that there! I might like it too much!”

Most of you will probably think this is just the usual, boring garbage. You know how Dr. Dirty raises obscenity to a new level of art? DOKTORMENTOR does the same thing with trash. Make no mistake, it is trash, but it is the most glorious trash you will ever come upon."

This time out, they use actual vintage nudies to tell their new story, BETTIE PAGE IN DANGER! Yes, ladies and gentlemen, they have acquired rights to many of Page’s photo shoots so they could bring you this corny goofball horror tale. She works at Artsy Tartsy Photography, where one of her fellow models, Daisy, has gone missing. After a lot of really bad jokes and gratuitous nudity, she arrives at a haunted house where Daisy has been tied up and sexually tormented by a family of sentient zombies.

Yes, you read that right. And the jokes are really, really awful, stuff you’d slap your own child for laughing at. But who the fuck came here looking for snappy dialogue? Despite the bad zombie mask, the true star of this book is the photography. The unnamed writer really did his (or possibly her) homework in not only getting these photos together, but also assembling them in some kind of order that they actually tell a story, no matter how pointless and stupid the story might be.

But that’s not all: there’s a back-up story called “Strange Stripper Stories,” featuring more of what you got in the first part of the book. It purports to be true stories from stripperdom, and the stripper in question tells the tale of how her young friend once encountered TOGA PARTY TERROR. There isn’t much story here, though. At least with the Bettie Page stuff, they TRIED to keep up the pretense of telling a tale. Here, the words are there just ‘cuz. You can’t have a comic book without ‘em. This is just another excuse to showcase boobies (not that there’s anything wrong with that).

If you’re looking for a good time, a laugh or two, and some nice tit shots, this is the book for you. Those seeking serious lit-rit-ure need not apply. The best part: judging from the sneak peek at the cover of issue two, it looks like Bettie Page will have a run-in with Doktormentor! Yes!"

I’m not normally a consumer of comic books, since I’ve typically got about a thousand books on my nightstand instead, but when my pal Jimmy Callaway mentioned he had a Bettie Page comic for sale, I was intrigued.

As you can see from the cover, this “Bettie Page in Danger” comic combines vintage Bettie Page photos and modern pin-up pix (in 3D, no less!) for mature audiences only. They also include some “true and twisted striptease stories,” and come with both a set of 3D glasses (which haven’t changed at all since I was a kid; they’re still made of cardboard and cellophone) and a bonus DVD.

I was most intrigued by the DVD, when I first picked up my copy, as I couldn’t imagine what might be on it. More pix?

Nope, there’s actually another odd mash-up of vintage Bettie films and modern-day footage, telling the tale of some female prisoners and their torture at the hands of the evil Doktormentor (who, it seems, also has his own spinoff series).

According to my sources, there are currently 11 issues in this series, created by SHH! Productions. This comic is actually the fourth in the series, so I’ll admit to being a bit confused by the plot, having missed the previous three episodes. Then again, it’s Bettie Page posing in pinup shots with comic book bubbles superimposed – what more do you really need to know?

Though the puns here will leave you groaning, I enjoyed flicking through this crazy comic. I might suggest, however, that you not try reading it in public – unless you like to receive odd looks, glares and rude remarks from strangers. (My husband also insisted I brown-bag it when I popped by his workplace, since the cameras might pick it up and wonder why I was ogling nude females in a place of business.)